Welcome to the world of Python programming. Here you'll learn Python, not only by theory but also by code. That is, whenever the practical programs are needed for the topic, I've included them along with their respective output.

Note: All the codes written in Python here are well tested using one of the most popular IDEs for Python, named PyCharm.

Note: Before starting the tutorial on Python programming, let's first read all the things provided here very carefully to understand all about Python programming, along with some interesting questions related to Python. I know it will take your crucial time, but trust me, you're investing your time in the right path.

Applications Written in or Using Python

In the IT sector, one of the top companies, Google, uses Python for its system administration and system building purposes. There are an extensive number of applications written in or using the Python programming language. These are the lists of some famous and well-known applications all over the world:

Even NASA and SpaceX use the Python programming language for many purposes, like testing, automation, etc.

programming language. Before going into the brief history of the Python language, that is, who, where, and when the language was developed. Let's talk about some questions, asked by many beginners before start learning Python.

I've answered all those questions related to Python programming, which provides a clear-cut understanding of the language, why and for what the language is used.

That is, if you're learning Python or want to learn Python, then it is a must to know the thing that tells, is it good to invest time in learning Python programming ?
Let's find out.

Despite the many reasons provided below (after this section) to learn or inspire you to learn Python programming, the main reasons are:

Note: Python is one of the most in-demand languages all over the world.

What is Python used for ?

Python can be used for many purposes, among which these are a list of some common ones:

That is, the main use of Python programming is to develop applications for:

Is Python easy to learn ?

It depends on your skills. This means that, if you've got a basic understanding of any programming language such as C, C++, or Java, etc., then learning Python becomes an easy task for you. That is, it becomes very easy to understand the code written in Python.

The only difference is to understand its syntax, like the for loop used in Python, which is very different from these languages. The conditional statements are also different. And it should be, because it is a different language. But the main work or task of all the things like loops or statements or any other things like functions, classes, etc., is the same.

Therefore, if you have a basic command of any programming language, then learning Python is like learning HTML. But sometimes you'll have some difficulties in understanding the code. But don't worry, I've written an explanation of each and every code given here.

And if you've never learned any language before, then you need not worry. Because Python is so simple, even printing Hello World in Python can be done using a single statement, as shown below, unlike most of the other languages that require multiple lines of code, even for printing your first name:

That's it; this prints the string "Hello World" on the screen. Now you're getting the idea of the language's simplicity. Therefore, just start the series without any hesitation, whoever you are. That is, all programmes written in Python here are easily understandable by beginners too, as I've explained each and every code along with its output. And trust me, most of the time, you'll understand the code without reading the explanation of the code.

How Much Time Does it Take to Learn Python ?

Well, it depends on you, how long or how deep you want to go in Python. But the basic version of Python can be learned mostly in a week, a month or two, depending on your skill. If you're a programmer, then it takes hardly 2 months to complete the basics of Python.

But to be professional or to be an expert programmer in Python, you need to give some good time to it. Also, you need to practise each and every code given here along with your self-practiced code.

Is Python OK for Beginners ?

As a result, because Python programs are less wordy, they are also easier to understand for beginners. After seeing fewer codes to do a program, more confidence automatically builds up in a beginner's mind. Python essentially provides English-like codes, which feels like reading a book at times.For example, the code given below adds two numbers in Python:

If you read the code, it is like, a is equal to 10, b is equal to 20, sum is equal to a+b, and finally print the sum. That is, a+b becomes 10+20, so 30 is the output produced by the above program using the print() function. That's it. See how easy Python is? The above program can also be written as:

Both the programs given above produce 30 output. You see, how easy Python is. Don't worry about the first statement of the second programme or the whole program, if you're not getting the idea. Because this is just a demo, you'll get to know each and every aspect of the codes written in Python one by one in upcoming tutorials.

Why is Python so popular ?

because of its flexibility, scalability, rapid development, and excellent performance. Also, the popularity of Python is increasing day by day, as it is an easy-to-learn programming language with its simplified syntax.

The answer to this question is, I think, already covered in the section What is Python used for ?, which makes Python such a popular language.

Can Python be used for hacking?

Yes, Python is a very powerful language to work with when developing code for hacking purposes.And I must tell you that Python is one of the most loved languages used by hackers all around the world. It is an open-source language and has an extensive number of libraries.

As I've answered all the questions that must be asked before starting the series of Python tutorials, now it's time to get the background of Python, who, when and where the language was developed and all such details.

Python was developed by Guido van Rossum, a Dutch programmer.

Where was Python developed ?

Python was developed at Centrum Wiskunde & Informatica (CWI), a National Research Institute for Mathematics and Computer Science. This institute is located in Amsterdam Science Park, the Netherlands. This institute is popularly known as the creator site of the Python programming language.

When was Python created ?

What are the filename extensions for Python source code?

What languages was Python influenced by ?

Python was influenced by many programming languages, including C, C++, Java, Perl, Ada, and Lisp, among others.

Which Languages are Influenced by Python ?

Python has influenced a large number of programming languages, including JavaScript, Ruby, Swift, and Go, among others.

A Brief History of Python

What is the design philosophy of Python ?

This is the list of core or main aspects that were kept in mind while designing or developing the language "Python". That is, the main design philosophy of Python is:

To program in Python or to develop an application using Python, we need an integrated development environment, or in short, an IDE. Therefore, I've provided a list of famous IDEs specially used for Python programming. Those lists of IDEs are given below along with their essential details like how much disk space the IDE takes, in which language the IDE is written in etc.:

Note: PyCharm is the most popular IDE for Python. I've been using this IDE for the last 4-5 years.

There are plenty of frameworks available in Python. But first, let's go over some of the most well-known and widely used Python web frameworks.

Note: From the above, Django is the most commonly used web framework in Python to develop both small-scale and large-scale web applications.

A Non-Full-Stack Web Framework for Python

Note: From the above, Flask is the most commonly used web framework in Python to develop small-scale web applications.

For a graphic framework, use any of these two famous frameworks, namely PyGame and Panda3d.

As all the essential details of Python programming are covered above, let's see some code written in Python. These codes are given to you to show you the demo of Python. You'll learn everything in the upcoming chapters.

produces exact the same output as shown in the snapshot given below.

Note: In the following chapter, you will learn how to set up a Python environment that demonstrates how Python code can be written and executed.

Here is another code written in Python:

This program produces the following output. This snapshot shows the initial output produced by the above Python code: 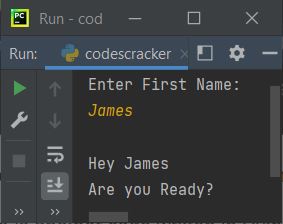 Note: To learn Python without reading theory, that is by reading the code and its output, start with Python Programming Examples. I've written almost thousands of lines of code in Python. That helps a lot. But I recommend you first read the tutorial. Because the tutorial contains all of the necessary information about the topic, as well as an example code and its output.

These are the list of some hot topics of Python programming language:

Message for the Audience before Starting the Python Tutorial

This Python programming tutorial is designed for all those who want to learn Python. Therefore, if you too are interested in Python, then follow the tutorial.

This tutorial is designed for all-that is for beginners, intermediate Python programmers, and those who want to increase their expertise in the field.

Note: I've included as many codes as possible in each and every chapter, to provide you with the best experience of learning in both theory and practise. All codes are written along with their respective outputs wherever required.

Note: All the code I've written here is using the PyCharm IDE.

Some Prerequisites for Learners

Python is good for beginners. Therefore, you can start learning Python here without having any prior knowledge.

The only prior knowledge is basic computer skills, which are needed to setup the environment for Python as explained in the next chapter.

But if you've got some basic commands in any programming language, Then trust me when I say that the speed with which you learn Python increases with your programming proficiency. So let's begin. Best of luck! 😀